The following is a list of places Eleanor and A Decent Woman have recently been featured online: 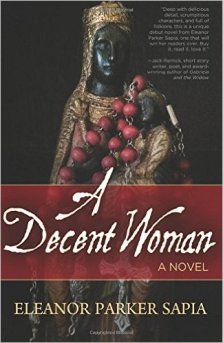 Eleanor’s article on the inspiration for A Decent Woman was featured in the May 2015 issue of  Historical Novels Review magazine, a publication of The Historical Novel Society, in the New Voices column. https://historicalnovelsociety.org/new-voices-william-klaber-laura-lebow-cynthia-ripley-miller-eleanor-parker-sapia/

Interview on The Dark Phantom Review

Re-blogged on As the Pages Turn

Character Interview on Beyond the Books

Interview on The Examiner

Trailer Spotlight on If Books Could Talk

Re-blogged on Beyond the Books

Spotlight on Review From Here

Interview on Straight from the Author’s Mouth

Spotlight on The Writer’s Life eMagazine

Interview on Invitation to a Book

Interview on She Writes

Review on Goodreads (and Amazon)

Review on The Writer’s Life eMagazine