I first learned about healing from my grandmother and mother, both deceased, and from an aunt, my oldest living relative who was married to my uncle. They taught me which saint to pray to depending on the need and prayer request, what offerings each saint enjoys, and which herbs to take for an upset stomach, a headache, or body pain. I’m still learning. Most of their knowledge came from a family friend, a psychic medium by the name of Doña Pina, now deceased, who lived in Urbanización Constancia in Ponce when I was young. Every family visit to Puerto Rico involved a visit, or two, to Doña Pina—one of the most famous mediums on the island in her days.

Pina’s sala de espera/waiting room was always full of people from all walks of life, who waited patiently to consult about a love lost, money woes, a wandering husband, or about communicating with a dearly departed loved one, and for the merely curious, a general reading. As a teen, I was deathly afraid of Doña Pina, but when it was my turn to enter her reading room, I was attentive, furiously copying everything the kind woman and the spirits said about my ancestors who protected me and my future. I often wondered how much my grandmother and mother told Doña Pina about me, which would have explained how the medium knew about the time my cousin Cuca and I, young teens at the time, taped a piece of paper to an empty tin can that read, “Please Donate to Hurricane Victims”, and went door to door asking for money, which we spent on a pack of cigarettes for our clandestine smoking sessions behind my aunt’s house. Not our finest moment!

NOTE: I’m the blond in the bathing suit in the bottom left. My partner in crime is the little girl with the hair clip in her hair on the right.

So when the same cousin’s daughter told us about a curandera, a healer, she’d visited on the outskirts of Ponce who still saw clients, my sister and I were immediately intrigued by the ninety-three year old woman who healed intuitively with herbs, leaves, and botanical remedies. We were instructed to tell the healer what ailed us, where it hurt, and Doña Chencha would take it from there. Done. We were in. I’d included many healing recipes in my historical novel, A Decent Woman, set in turn of the century Puerto Rico, and I was excited to learn more.

After leaving the bustling city center of Ponce behind, we drove up a steep hill with modest cement homes on both sides of the street, and stopped in front of a large house on a hill surrounded by a tall wrought iron fence. Mari called out for Doña Chencha and when no one answered, we opened the gate and walked up the cement driveway. In a beautiful garden lined with flowering shrubs, fruit trees, and plantain trees, we found the curanderahanging clothes on a line, standing next to a wire cage that held two blue-green parakeets, who announced our arrival.

Chencha hung the last wet blouse on the line, and slowly turned to face us with twinkling eyes, white hair, and milky-white skin. When Mari asked if she was working that day, the healer nodded and smiled warmly. Chencha asked which of us needed treatment and I spoke up. She asked what ailed me. I told her about my lower back pain and my now-frequent bouts with sciatica. I added that I suffered from indigestion from time to time. The healer nodded and motioned for me to follow her. The woman’s gait was slow and appeared painful. Her hands were gnarled with raised veins, and I smelled Agua Florida on her clothing—a common treatment for headaches and whatever else ails you.

I said a prayer before entering the humble casita, her treatment room, equipped with a hospital bed with a floral-printed sheet that smelled freshly laundered, a wooden chair, and a small wood table that held a plastic bottle of some kind of liquid and what looked like a long, brown scapular draped around the neck of the bottle. I was instructed to lay face-up on the bed and undid the buttons of my shorts. The woman raised my shirt, lowered the shorts to my hips, and took a bit of what turned out to be alcohol infused with little blocks of crystal menthol. She warmed her hands by rubbing them together, and then produced the “scapular” which she placed around my waist, making the sign of the cross on my upper stomach several times, which is called santíguo. I winced as her experienced hands went to the exact spot that often troubles me. She massaged my entire abdomen several times in a clockwise fashion and made the sign of the cross while whispering what I imagine were prayers.

Chencha’s diagnosis was a badly-digested crab dish that had gone bad at some point. She recommended an immediate enema (yuck) when I got home of mineral oil and Jabón Castilla (white, hard soap made in Spain). I was to drink a tea made of mint, yerba buena, hojita de guanábana (guanabana leaves), and bicarbonate of soda. At night, she recommended alternating between boiling hoja de tártago from a medicinal plant with leaves that resemble a marijuana leaf and almond oil, or boiled salvia plant and salt, dipping a clean cloth and allowing it to cool before placing it on my upper abdomen overnight. 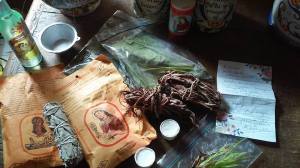 Next, I lay on my stomach with the scapular around my waist, and she massaged my lower back and hips. I felt her fingers make the same cross points on my back. She said I needed to walk more after I told her I sit for hours on end, writing.  I told her about my sister’s arthritic hands, and Doña Chencha recommended mixing manteca de úbre, pomade de arnica (arnica plant), and one leaf of the higueréta maliguá plant in a pilón (mortar and pestle) for both of us. We were to slather our hands and lower backs with the mixture and cover with cotton gloves and a cotton sash around our waists.

When my sister was called in, the healer saw my sister’s hands and said, “Cortisone shots for you,” feeling the arthritis would get worse without medical treatment, which surprised me. But my sister prefers oils and natural healing to medicine and surgery, which has been suggested to her.

We hugged the curandera several times, and asked if we could take her photograph. She smiled and said she was too old for that 🙂 My cousin snuck two photographs of her, but each time the camera came out, Doña Chencha turned her face. I imagined the camera might take her ‘ju ju’ away. The woman blessed us, we blessed her back, and thanked her for her time and wisdom.

The curandera was warm and loving, and I thought what a shame it would be for her botanical and spiritual wisdom and knowledge to be lost. I hope someone is writing all her remedies down! Just think of all that medicine carefully and lovingly grown in Chencha’s back yard, and in our own gardens! I hope to visit again next year and take more notes. 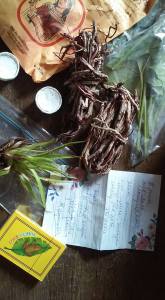 Yesterday I joined Planet Fitness and today I worked out in a gym for the first time in many years, just in time for fall and winter when I don’t get out much. I feel better already, but will still search for the items on Chencha’s list. I want to cover all bases! I hope you’ve enjoyed my account of my healing session–it was an amazing, healing experience I won’t soon forget.

Puerto Rican-born novelist, Eleanor Parker Sapia, was raised in the United States, Puerto Rico, and Europe. Eleanor’s careers as an artist, counselor, alternative health practitioner, Spanish language social worker and a refugee case worker inspire her stories. She is a member of Las Comadres Para Las Americas, PEN America, and the Historical Novel Society. When Eleanor is not writing, she facilitates creativity groups, reads, and tells herself she is making plans to walk El Camino de Santiago de Compostela a second time.

A Decent Woman is Eleanor’s debut novel, set in turn of the nineteenth century Puerto Rico. The book was selected as 2015 July Book of the Month for Las Comadres & Friends Latino Book Club. Eleanor is the mother of two adult children and currently lives in West Virginia, where she is writing her second novel, The Island of Goats.