As a novelist, I often enjoy allowing the themes in my stories to develop organically. The themes of religion and spiritism, among others, run through A Decent Woman. My main protagonist, Ana Belén, an Afro-Cuban midwife born into slavery, was raised in the Yoruba tradition, which is not the same as voodoo or practicing black magic. Ana speaks to the spirits of her ancestors and to the orishas, the gods and goddesses of her Nigerian ancestors, as she prays the Catholic rosary and honors the Blessed Mother of God. 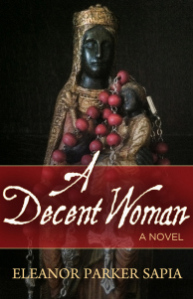 Serafina, a devout Catholic and one of Ana’s midwifery clients, becomes her best friend later in life. Both women are baptized Catholics and although they share a great devotion to the Virgin Mary, Ana continues to practice the Yoruba tradition, so as to cover all bases in protecting herself and her clients, which was common.

I spent many years of my childhood in Puerto Rico–my religious and spiritual life was a mix of religion, spirituality, with a good dose of superstition thrown in for good measure. All through my childhood, I attended Catholic schools and went to Mass every week. As a teen, I visited a psychic after my first boyfriend died in a motorcycle accident, and I still pray the rosary in the car when I travel. I check my monthly horoscope, as well…perhaps like Ana, I’m still trying to cover all my bases..

An excerpt from A Decent Woman –

“One day I found the cowrie shells on my bed. I didn’t know who’d returned them or why. I hid the shells in my room and went to the kitchen to prepare the priest’s lunch. As I was serving the almuerzo, I heard yelling. I was given a few minutes to gather my belongings and was escorted off the property by the same young priest who’d found my things. I was accused of practicing witchcraft. He crossed himself, barely blessed me, and shut the rectory gate in my face.”

Serafina furrowed her brow and shook her head. “That’s so cruel. You were so young. What did you do?”

“I was young. Thankfully, it was early enough in the day for me to find a safe place to sleep before the sun went down. At first, I was confused; I had no idea the Church considered our Yoruba traditions black magic,” she said. “It is the religion of my ancestors.

“But, you do believe in God y la Virgen?” asked Serafina, watching her closely.

“Yes, of course. I believe in God, the Virgin Mary, and all the Saints. We slaves had different names for them. My Yoruba traditions are now mixed with Catholicism from so many years in Porto Rico, and I pray to them all,” said Ana. “You know, I still remember the church bells ringing the day I was thrown out. I crossed the church grounds and looked up at the sky, watching the clouds around the church steeple. The white steeple looked gray that day, and suddenly, hundreds of palomas flew around the tower. So many doves, I could barely see the sky. I followed them across the street to the park to figure out my next step, and one dove landed on the marble bench where I sat. I thought it was the Holy Spirit!”

“Maybe it was, Doña Ana! You never know!”

“I doubt it, child,” Ana grinned. “It was a sign of something, but I didn’t know what. I sat on that bench all day long, paralyzed with fear. And that’s where I slept, right in front of the church where surely God would protect me. The next day, I met Doña Milagro, who taught me everything I know about being a midwife.”

Another excerpt from A Decent Woman –

“You’re giving me your turn?” Emilia nodded. Ana made the sign of the cross before pushing aside the heavy, black velvet curtain. She sat in the chair closest to the entrance and looked around the medium’s reading room. The only source of light emanated from a single candle on the small table in front of her that also held an ashtray, a small stack of mismatched sheets of paper, a stump of a pencil, and a bowl of water. To the right, Ana saw a small bookcase stuffed full of old, dusty books with titles she couldn’t read without sufficient light. The room was probably crawling with spiders, she thought. She looked down, expecting to see a huge insect crawling up her leg, and then she stomped on the floor to deter any bugs.

“Hurry, Fela,” Ana said, smoothing her dress, and smelled the musty smell of cigar smoke. Behind Fela’s chair stood a two-tiered altar that held a multitude of religious statues, icons, candles, and vases. Most statues had white faces, some had black faces and hands, and most of them had either rosary beads or scapulars hanging from the necks. Ana couldn’t help but giggle at the statue with the over-sized pair of spectacles. Numerous vases of all sizes held freshly-cut lilies, wilted bunches of flowers, and stiff, dried flowers standing in stagnant water. The heavy scent of patchouli and frankincense reminded Ana of a church. But this church was of a different world—the world of spirits.”